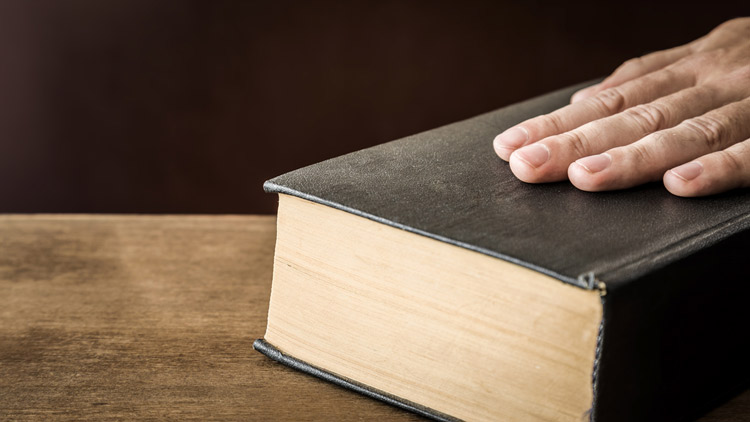 Guaranteed With an Oath

When God desired to show more convincingly to the heirs of the promise the unchangeable character of his purpose, he guaranteed it with an oath, so that by two unchangeable things, in which it is impossible for God to lie, we who have fled for refuge might have strong encouragement to hold fast to the hope set before us. We have this as a sure and steadfast anchor of the soul.
Hebrews 6:17-19

An oath should carry great weight for both the person making it and the person receiving it. It’s a decisive appeal to the highest power available, intended to end all doubt over someone’s word and confirm the reliability of the promise being made. Though people have repeatedly made nonsense of oaths through lying and perjury, they are still meant to demonstrate the integrity of one’s word.

An oath is, of course, only as good as the character of the individual making it. Therefore, we know that God’s promises are trustworthy if for no other reason than the fact that He made them. He didn’t need to guarantee His promise with an oath; the bare promise of God to His people is sufficient to command our belief. Yet He went a step further, swearing by Himself, since He cannot swear by anyone or anything greater.

God has brought us from the realm of hopelessness into the reality of hope, and the anchor of our souls is secure and certain. It is fixed to an immovable object—the promises of God—and fixed in the unseen heavenly realm by the God who cannot lie. These promises are so secure, in fact, that sharing them with others in evangelism is compelling to them, because we live in a world that is full of desperation and a culture that tries to cover its discontentedness with fake smiles, vacations, and material gain.

How wonderful that we can be people who are grounded in faith, anchored by the promises of our God. Jesus Christ is worthy of our trust, and we can know that “all the promises of God find their Yes in him” (2 Corinthians 1:20), whose life, death, resurrection, and ascension have achieved for us a momentous and eternal victory.

Which promises of God to you do you find hardest to trust and to build your life upon? Remember who made those promises. He is the same God who swore to childless, elderly Abraham that his descendants would be as innumerable as the stars in the sky above him—and who kept His promise. He is the same God who swore to His disciples that He would be rejected and killed, and then after three days rise again—and who kept His promise. Remember who has made the promises you find hard to believe. Remember what He is like. That is the anchor for your soul and the hope for your future.

Tell of All His Wonderful Works

1Oh give thanks to the Lord; call upon his name;

2Sing to him, sing praises to him;

3Glory in his holy name;

4Seek the Lord and his strength;

5Remember the wondrous works that he has done,

his miracles, and the judgments he uttered,

6O offspring of Abraham, his servant,

7He is the Lord our God;

8He remembers his covenant forever,

9the covenant that he made with Abraham,

10which he confirmed to Jacob as a statute,

11saying, “To you I will give the land of Canaan

12When they were few in number,

13wandering from nation to nation,

14he allowed no one to oppress them;

15saying, “Touch not my anointed ones,

16When he summoned a famine on the land

and broke all supply1 of bread,

17he had sent a man ahead of them,

Joseph, who was sold as a slave.

18His feet were hurt with fetters;

his neck was put in a collar of iron;

19until what he had said came to pass,

the word of the Lord tested him.

20The king sent and released him;

the ruler of the peoples set him free;

21he made him lord of his house

and ruler of all his possessions,

22to bind2 his princes at his pleasure

and to teach his elders wisdom.

23Then Israel came to Egypt;

Jacob sojourned in the land of Ham.

24And the Lord made his people very fruitful

and made them stronger than their foes.

25He turned their hearts to hate his people,

to deal craftily with his servants.

26He sent Moses, his servant,

and Aaron, whom he had chosen.

27They performed his signs among them

and miracles in the land of Ham.

28He sent darkness, and made the land dark;

they did not rebel3 against his words.

29He turned their waters into blood

and caused their fish to die.

30Their land swarmed with frogs,

even in the chambers of their kings.

31He spoke, and there came swarms of flies,

and gnats throughout their country.

32He gave them hail for rain,

and fiery lightning bolts through their land.

33He struck down their vines and fig trees,

and shattered the trees of their country.

34He spoke, and the locusts came,

35which devoured all the vegetation in their land

and ate up the fruit of their ground.

36He struck down all the firstborn in their land,

the firstfruits of all their strength.

37Then he brought out Israel with silver and gold,

and there was none among his tribes who stumbled.

38Egypt was glad when they departed,

for dread of them had fallen upon it.

39He spread a cloud for a covering,

and fire to give light by night.

40They asked, and he brought quail,

and gave them bread from heaven in abundance.

41He opened the rock, and water gushed out;

42For he remembered his holy promise,

and Abraham, his servant.

43So he brought his people out with joy,

his chosen ones with singing.

44And he gave them the lands of the nations,

and they took possession of the fruit of the peoples' toil,

and observe his laws.