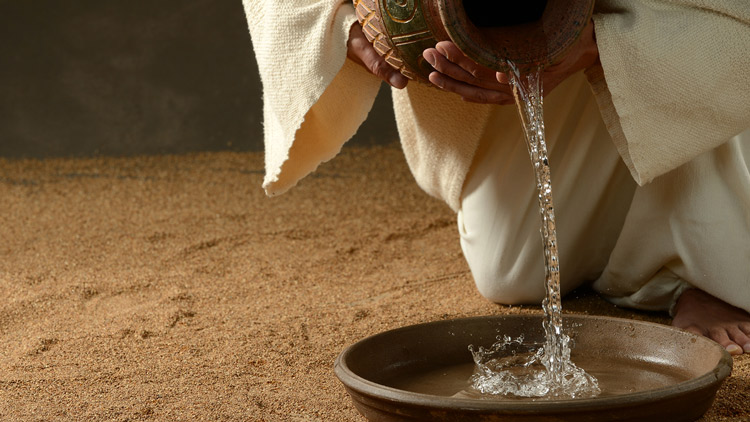 You call me Teacher and Lord, and you are right, for so I am. If I then, your Lord and Teacher, have washed your feet, you also ought to wash one another’s feet.
John 13:13-14

Andrew Martinez was one of the greatest caddies in the history of golf, caddying for greats like Johnny Miller, John Cook, and Tom Lehman. He was also a talented athlete in his own right. Part of what made him extraordinary as a caddie was his devotion to his boss, which started as soon as he stepped into the caddie shack and put on the white overalls. In his role, he lost himself. He was still Martinez, but the name on his back read differently; he existed solely to serve someone else, despite his own giftedness and capabilities.

The night before He died, in what is one of the most memorable scenes from His earthly life, Jesus washed His disciples’ feet. One of the reasons He did so was to model humble service, for the work of foot-washing was the role of a slave, not of a king. We can all benefit from following His example: the Creator washed the feet of His creatures and, in so doing, He served both His feuding disciples and His betrayer, Judas. Such an action was above and beyond the typical hospitality this ritual entailed.

Jesus’ actions were an example for us to follow (“you also ought”), but they were not merely an example—and if all we latch on to in this account is the call to copy Jesus’ humble behavior, we risk getting lost in moralism and missing Christ’s full and glorious intention. As He washed His disciples’ feet, Jesus knew what the immediate future held. He was acutely aware that a time of great sorrow—His coming crucifixion—was imminent. His action showed that the future is always in the Father’s loving hands. The cleansing of His followers’ feet symbolized the future cleansing of their souls—a cleansing not by the water in His bowl but by His blood on the cross. In His humility, the Son of God offers to wash us clean of the stain of our sin, and we must meet His humility with ours by accepting our desperate need and asking to be so washed.

Only once we appreciate how we have been served by our Savior will we serve others in the same way. Peter, who at the time was confused by what Jesus was doing (John 13:6-8), would one day grasp his Lord’s message. Years later, he would encourage his fellow believers to “humble yourselves … under the mighty hand of God so that at the proper time he may exalt you” (1 Peter 5:6). He knew that Christ’s example was meant to do far more than modify our behavior; it was meant to humble us and then to assure us of our forgiveness.

In what way are you called to wash the feet of others today? How can you sacrifice your own time or comforts to serve those around you in ways that can be motivated only by humble love? And most importantly, how can you serve others in ways that point them to the greatest act of service—the cleansing that Christ’s blood, shed on the cross, provides?

1Now before the Feast of the Passover, when Jesus knew that his hour had come to depart out of this world to the Father, having loved his own who were in the world, he loved them to the end. 2During supper, when the devil had already put it into the heart of Judas Iscariot, Simon's son, to betray him, 3Jesus, knowing that the Father had given all things into his hands, and that he had come from God and was going back to God, 4rose from supper. He laid aside his outer garments, and taking a towel, tied it around his waist. 5Then he poured water into a basin and began to wash the disciples' feet and to wipe them with the towel that was wrapped around him. 6He came to Simon Peter, who said to him, “Lord, do you wash my feet?” 7Jesus answered him, “What I am doing you do not understand now, but afterward you will understand.” 8Peter said to him, “You shall never wash my feet.” Jesus answered him, “If I do not wash you, you have no share with me.” 9Simon Peter said to him, “Lord, not my feet only but also my hands and my head!” 10Jesus said to him, “The one who has bathed does not need to wash, except for his feet,1 but is completely clean. And you2 are clean, but not every one of you.” 11For he knew who was to betray him; that was why he said, “Not all of you are clean.”

12When he had washed their feet and put on his outer garments and resumed his place, he said to them, “Do you understand what I have done to you? 13You call me Teacher and Lord, and you are right, for so I am. 14If I then, your Lord and Teacher, have washed your feet, you also ought to wash one another's feet. 15For I have given you an example, that you also should do just as I have done to you. 16Truly, truly, I say to you, a servant3 is not greater than his master, nor is a messenger greater than the one who sent him. 17If you know these things, blessed are you if you do them.

Footnotes
1 13:10 Some manuscripts omit except for his feet
2 13:10 The Greek words for you in this verse are plural
3 13:16 Greek bondservant
Topics: Humility Jesus Christ Service