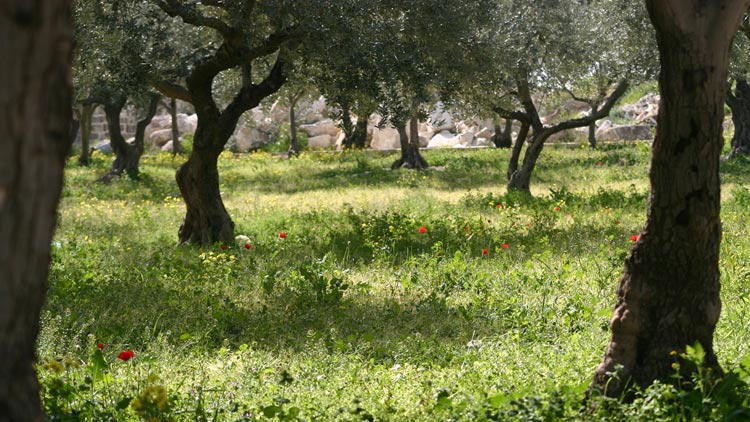 Judas, having procured a band of soldiers and some officers from the chief priests and the Pharisees, went there with lanterns and torches and weapons. Then Jesus, knowing all that would happen to him, came forward and said to them, “Whom do you seek?” They answered him, “Jesus of Nazareth.” Jesus said to them, “I am he” … They drew back and fell to the ground.
John 18:3-6

The Gospel writers all cover similar events from Jesus’ life, but each highlights particular details and aspects of Jesus’ identity. One of John’s intentions was to establish Jesus’ supremacy and victory over the very circumstances that were meant to degrade and humiliate Him. Consider Jesus’ arrest in the Garden of Gethsemane: He surrendered willingly but authoritatively, revealing His majesty as Savior of the world. Once, people had tried to force a king’s crown upon Jesus, and He had withdrawn because He knew that worldly kingship was not His destiny (John 6:15). Here, when the soldiers came to force a cross upon Him, He knew all that would unfold. They were surely expecting to have to search far and wide for this notorious Galilean carpenter. Instead, here He was, willingly surrendering, with a majesty in His voice, a look in His eye, and a bearing about His person that contributed to the magnitude of the moment. No wonder they “drew back and fell to the ground.”

When Jesus surrendered Himself to those who would treat Him as a blasphemer and a criminal, He did not deny who He was. In fact, He used language that communicated His divine identity and authority. Jesus used the phrase “I am” not only to tell the soldiers He was Jesus of Nazareth but also to identify Himself as the one who had appeared to Moses at the burning bush (Exodus 3:14). This was the same phrase that had, months earlier, seen Him nearly stoned (John 8:58-59), for it was a clear claim to be the self-existent, living God.

Now here is this God, stepping forward to stop His friends resisting and allow His enemies to kill Him. Why? As Christ came forward in the garden, He was not only protecting His disciples but also providing for His people. He stepped forth as the substitute for sinful humans, as the fulfillment of all that had long been anticipated. He knew exactly what He stepped toward: “Christ also suffered once for sins, the righteous for the unrighteous, that he might bring us to God” (1 Peter 3:18).

In His combination of willing surrender and divine authority Christ took the next step toward the cross, where His sacrifice won our salvation. He did not run from the cross but rather walked resolutely toward it. And He did that for you.

It is a thing most wonderful,
Almost too wonderful to be,
That God’s own Son should come from heaven,
And die to save a child like me.[1]