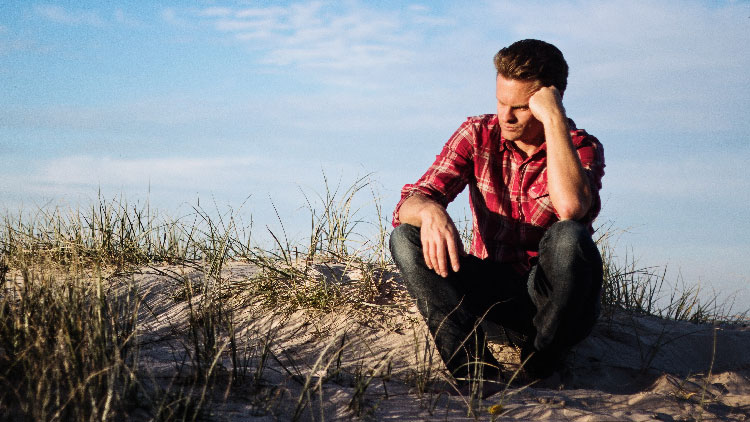 Between Faith and Fear

“See my hands and my feet, that it is I myself. Touch me, and see. For a spirit does not have flesh and bones as you see that I have.” And when he had said this, he showed them his hands and his feet. And while they still disbelieved for joy and were marveling, he said to them, “Have you anything here to eat?”
Luke 24:39-41

The disciples were real people—and they found believing in the resurrection difficult.

News of Jesus’ resurrection produced a roller coaster of emotions within His disciples. One minute they seemed to be up on the crest, and the next minute they were hurtling toward the ground. Reports of an empty tomb were met with mixed emotions of awe and unbelief. Indeed, they thought the words of the women who had discovered it were “an idle tale, and they did not believe them” (Luke 24:11).

Even when Jesus appeared suddenly and stood among His disciples, their sorrows were not soothed and their fears were not calmed. Instead, we discover that they were still in panic mode. Face-to-face with the resurrected Christ, they “were startled and frightened and thought they saw a spirit” (Luke 24:37). Even after Jesus showed them His hands and feet, they still battled disbelief as it jostled against the dawning joy.

This is a wonderfully honest picture, isn’t it? Here we find the group of people who were to be the pillars of the church, all essentially hiding behind couches and coming out of closets, saying, We thought we saw a ghost!

The disciples’ battle against fear and disbelief is a great encouragement for those who flip between hope and despair. It’s one thing to affirm our belief in the resurrection on a fine Sunday morning, surrounded by a crowd of fellow Christians. It is quite another to affirm it on a difficult Tuesday afternoon, surrounded by people who are convinced it is an idle tale, or when we are waiting on test results in the doctor’s office or fending off loneliness.

A real Christian is not someone who does not doubt; it is someone who brings their doubts to the fact of the empty tomb and reminds themselves that our faith rests on historical events, and that those historical events are ones which cause us to feel joy and marvel at God. If you find yourself today in a battle against fear and unbelief, cry out to God, praying the prayer of the man in Mark 9: “I believe, help my unbelief!”
(v 24). The disciples’ doubts and fears did not exclude them from the kingdom; neither did they preclude them from kingdom work. So today, ask God to guard your faith, and walk forwards remembering that Jesus really has risen and really does have work for you to do.

“Death is swallowed up in victory.”

55“O death, where is your victory?

O death, where is your sting?”

56The sting of death is sin, and the power of sin is the law. 57But thanks be to God, who gives us the victory through our Lord Jesus Christ.

58Therefore, my beloved brothers, be steadfast, immovable, always abounding in the work of the Lord, knowing that in the Lord your labor is not in vain.