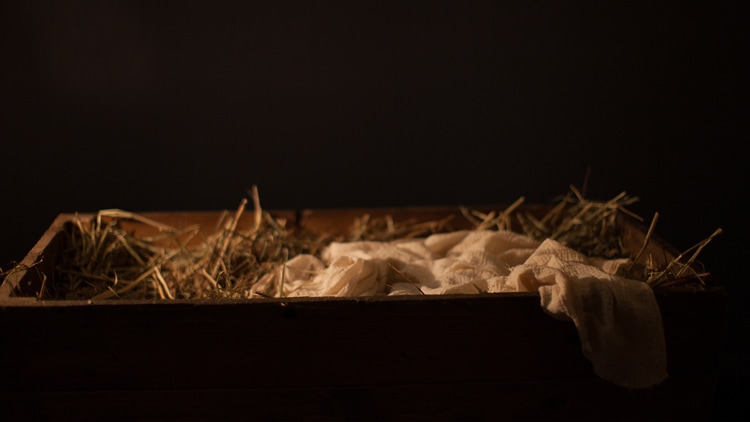 The Word became flesh and dwelt among us, and we have seen his glory, glory as of the only Son from the Father, full of grace and truth … from his fullness we have all received, grace upon grace.
John 1:14, John 1:16

The actor Steve McQueen led an amazing, albeit sometimes sordid, life. He died in 1980, but before illness claimed him, a faithful pastor shared the gospel with him, and he bowed down and trusted in Christ. After his conversion, he had a faithful routine of Bible study and Sunday worship that went unnoticed by the public. He remained in awe of the truth that though his life was messy with divorces, addictions, and poor moral choices, God would show him such love.

McQueen grew to understand that God had made him nothing so that in the discovery of his nothingness, he might then become something. God does the same with us as well.

In this, we are called to follow the pattern of Jesus Himself. From the day of His birth, Christ set aside His previously uninterrupted glory in order to come to this fallen, helpless world on our behalf. He came not on a chariot but to a manger; He came not with a scepter but to a stable. Jesus was as much an earthly servant as He is the heavenly sovereign.

To say that He made Himself nothing, however, doesn’t mean that He transitioned from being God to being man, and then back to being God again. When we read that “the Word became flesh and dwelt among us,” we should reflect on the awe-inspiring paradox that our marvelous Savior poured Himself into His humanity without giving up His deity. He is fully God and fully man!

Our finite human minds sometimes focus on Christ’s deity so much that we don’t remember that He was no less human than you or me; and at other times we can become so preoccupied with His humanity that we lose sight of His divinity. The Scriptures hold Christ’s two natures in perfect tension: although He was found in human form (Philippians 2:8), He was not merely who He appeared to be.

There is more to Jesus than meets the eye. He may have looked just like any other man, but no other man can stand in a boat during a storm and calm the sea. Only God can heal the lame or restore sight to the blind. This man alone deserves the worship of angels and the praise of all creation. Yet Jesus didn’t approach the incarnation asking, What’s in it for Me? Instead, He arrived knowing that He “came not to be served but to serve, and to give his life as a ransom for many” (Mark 10:45). He was willing to leave everything and become nothing so that those who acknowledge their nothingness can be given everything. He became flesh so that He might serve, and He beautifully modeled humility to all who might follow Him. How will you look to His example in your tasks and responsibilities today?

1So if there is any encouragement in Christ, any comfort from love, any participation in the Spirit, any affection and sympathy, 2complete my joy by being of the same mind, having the same love, being in full accord and of one mind. 3Do nothing from selfish ambition or conceit, but in humility count others more significant than yourselves. 4Let each of you look not only to his own interests, but also to the interests of others. 5Have this mind among yourselves, which is yours in Christ Jesus,1 6who, though he was in the form of God, did not count equality with God a thing to be grasped, 7but emptied himself, by taking the form of a servant,2 being born in the likeness of men. 8And being found in human form, he humbled himself by becoming obedient to the point of death, even death on a cross. 9Therefore God has highly exalted him and bestowed on him the name that is above every name, 10so that at the name of Jesus every knee should bow, in heaven and on earth and under the earth, 11and every tongue confess that Jesus Christ is Lord, to the glory of God the Father.

Lights in the World

12Therefore, my beloved, as you have always obeyed, so now, not only as in my presence but much more in my absence, work out your own salvation with fear and trembling, 13for it is God who works in you, both to will and to work for his good pleasure.

Footnotes
1 2:5 Or which was also in Christ Jesus
2 2:7 Greek bondservant
Topics: Christ's Birth Deity of Christ Humanity of Christ Incarnation of Christ