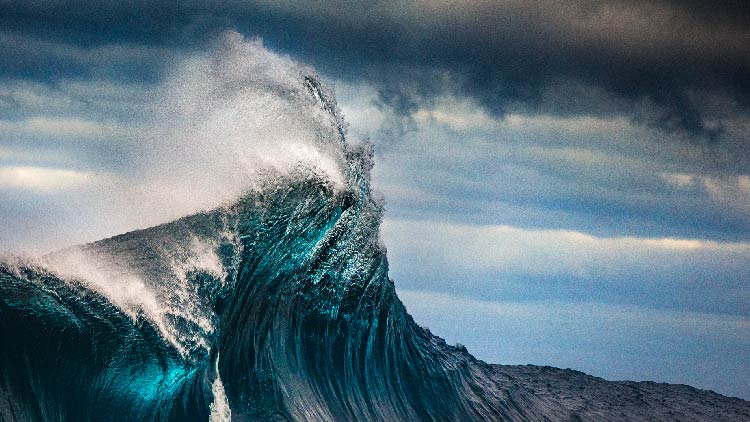 This very night there stood before me an angel of the God to whom I belong and whom I worship, and he said, “Do not be afraid, Paul; you must stand before Caesar. And behold, God has granted you all those who sail with you.” So take heart, men, for I have faith in God that it will be exactly as I have been told.
Acts 27:23-25

As Paul traveled as a prisoner on a boat to Rome, a debate broke out concerning the right course of action for their trip. During the debate, Paul gave a warning (Acts 27:9-10). Apparently, he had already identified himself by his character and leadership, and when it came to sea voyaging, he had wisdom to share. So Paul advised against continuing the voyage on the basis of what he knew about the sea and the season, and from his personal experience of being shipwrecked (2 Corinthians 11:25).

Paul’s warning was disregarded, but time proved him right. Suddenly, seemingly out of nowhere, the ship was driven along by a storm of hurricane force “called the northeaster” (Acts 27:14). The effect of the wind was so dramatic that in a moment, a calm sea became devastating, and the vessel was so buffeted that the lives of all on board the ship were threatened. At some point, those who had dismissed Paul’s warning had to look into one another’s eyes and say, You know, it’s all over. We are clearly not going to get out of here.

Yet while everything indicated that this was the end for Paul and all on the ship, the apostle still had the promise of God. In Acts 23:11, the Lord had stood by him and told him, “Take courage, for as you have testified to the facts about me in Jerusalem, so you must testify also in Rome.” Paul’s life may have been threatened by the turbulence, but God’s promise was sufficient—and it was a promise that His angel repeated to Paul at the moment of crisis on the ship. Despite appearances, there was no need to fear, for the promise had been made and would be kept. Therefore, Paul told those around him, they could take heart, for the God to whom Paul belonged does exactly as He has said.

In our daily lives, our experiences and feelings don’t always appear to agree with God’s promises. We know that He has assured us, “I will never leave you nor forsake you” (Hebrews 13:5)—but that vow can feel empty or remote. We know He has promised us that He will always be at work for the good of those who love Him (Romans 8:28)—but that can feel unlikely. We know He has said that His children will see Him face-to-face (Revelation 22:3-4)—but that can feel impossibly distant. Any of us can trust God’s promises when the sun is out and when the band’s playing. The challenge is to trust Him in the dark and in the silence—or, as in Paul’s case, in the midst of the raging storm.

When the fulfillment of God’s promise seems least likely, remember Paul. Even when your circumstances and God’s promises do not seem to align, know that as He has done repeatedly in the past, God will always keep His word. When wave after wave seems to be crashing upon you, you can trust that the God to whom you belong and whom you serve has promised to bring you safely to the golden shore and the eternal city.

21Since they had been without food for a long time, Paul stood up among them and said, “Men, you should have listened to me and not have set sail from Crete and incurred this injury and loss. 22Yet now I urge you to take heart, for there will be no loss of life among you, but only of the ship. 23For this very night there stood before me an angel of the God to whom I belong and whom I worship, 24and he said, ‘Do not be afraid, Paul; you must stand before Caesar. And behold, God has granted you all those who sail with you.’ 25So take heart, men, for I have faith in God that it will be exactly as I have been told. 26But we must run aground on some island.”

27When the fourteenth night had come, as we were being driven across the Adriatic Sea, about midnight the sailors suspected that they were nearing land. 28So they took a sounding and found twenty fathoms.4 A little farther on they took a sounding again and found fifteen fathoms.5 29And fearing that we might run on the rocks, they let down four anchors from the stern and prayed for day to come. 30And as the sailors were seeking to escape from the ship, and had lowered the ship's boat into the sea under pretense of laying out anchors from the bow, 31Paul said to the centurion and the soldiers, “Unless these men stay in the ship, you cannot be saved.” 32Then the soldiers cut away the ropes of the ship's boat and let it go.

33As day was about to dawn, Paul urged them all to take some food, saying, “Today is the fourteenth day that you have continued in suspense and without food, having taken nothing. 34Therefore I urge you to take some food. For it will give you strength,6 for not a hair is to perish from the head of any of you.” 35And when he had said these things, he took bread, and giving thanks to God in the presence of all he broke it and began to eat. 36Then they all were encouraged and ate some food themselves. 37(We were in all 2767 persons in the ship.) 38And when they had eaten enough, they lightened the ship, throwing out the wheat into the sea.

39Now when it was day, they did not recognize the land, but they noticed a bay with a beach, on which they planned if possible to run the ship ashore. 40So they cast off the anchors and left them in the sea, at the same time loosening the ropes that tied the rudders. Then hoisting the foresail to the wind they made for the beach. 41But striking a reef,8 they ran the vessel aground. The bow stuck and remained immovable, and the stern was being broken up by the surf. 42The soldiers' plan was to kill the prisoners, lest any should swim away and escape. 43But the centurion, wishing to save Paul, kept them from carrying out their plan. He ordered those who could swim to jump overboard first and make for the land, 44and the rest on planks or on pieces of the ship. And so it was that all were brought safely to land.