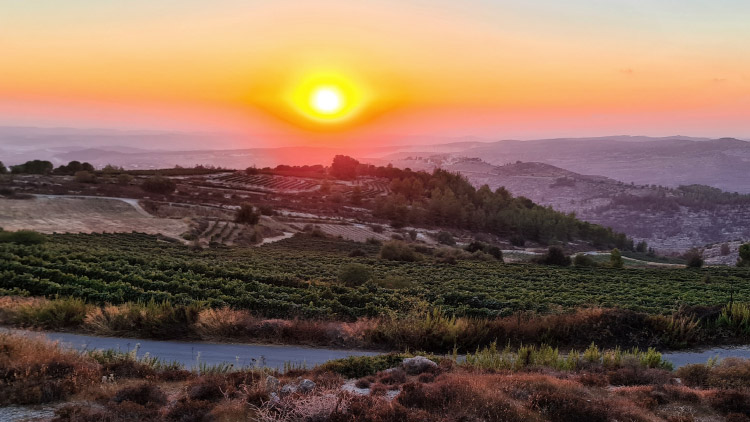 I will make for you a great name, like the name of the great ones of the earth. And I will appoint a place for my people Israel and will plant them, so that they may dwell in their own place and be disturbed no more. And violent men shall afflict them no more, as formerly, from the time that I appointed judges over my people Israel. And I will give you rest from all your enemies.
2 Samuel 7:9-11

As God made His covenant with David, He was prompting David to look both back to the past and forward to the future.

God’s promise to make David’s name like “the great ones of the earth” was an echo of His covenant with David’s ancestor Abraham, centuries before (Genesis 12:1-3). Up to this point in biblical history, there had been no name greater than that of Abraham, and the Lord now announced that He would fulfill His promise to make Abraham’s name great by making David’s name great. This promise, however, not only looked back but also forward—to the Lord Jesus Christ, at whose name “every knee should bow” (Philippians 2:10).

The promise that God’s people would have a place in which to dwell also was an echo of the past, in this case of the exodus from Egypt. (See, for instance, Exodus 15:17.) Yet by the time David was ruling, the people had been living in the promised land for centuries, so God’s promise of them being planted and secure surely hinted at something greater. The place called Israel, while significant, was merely a shadow of the reality that was yet to come. It pointed forward to another place—the ultimate place, the new Jerusalem, which would later be called “a new heaven and a new earth” (Revelation 21:1-2).

With the promise of a place also came the promise of peace, security, and rest. Again, here was a reminder that the goal was not yet reached. True, by this point in David’s reign, the people had been enjoying rest (2 Samuel 7:1)—but it was not the ultimate rest of the people of God to which the covenant pointed (Hebrews 4:9-10).

When God’s revelation later culminated in the coming of David’s descendant Jesus, the ultimate Christ, the people were able to say, “Oh, that’s what God’s promises meant!” The covenant that was first made to Abraham and took on a new dimension as it was made to David was completely fulfilled in the Lord Jesus Christ, the King of all kings; and it will be finally and fully realized when Christ returns.

So what does God’s promise to David mean for us? The apostle Paul declares, “If you are Christ’s, then you are Abraham’s offspring, heirs according to promise” (Galatians 3:29). The church consists of those who are privileged to be heirs and partakers of the promise that is in Christ Jesus through the gospel. Stand amazed at this, and rejoice that you have been included in the blessings of this great covenant. Look back to God working through your spiritual ancestors Abraham, David, and, supremely, Jesus—and look forward with hope to the final fulfillment of all that God has promised!

The Lord's Covenant with David

1Now when the king lived in his house and the Lord had given him rest from all his surrounding enemies, 2the king said to Nathan the prophet, “See now, I dwell in a house of cedar, but the ark of God dwells in a tent.” 3And Nathan said to the king, “Go, do all that is in your heart, for the Lord is with you.”

4But that same night the word of the Lord came to Nathan, 5“Go and tell my servant David, ‘Thus says the Lord: Would you build me a house to dwell in? 6I have not lived in a house since the day I brought up the people of Israel from Egypt to this day, but I have been moving about in a tent for my dwelling. 7In all places where I have moved with all the people of Israel, did I speak a word with any of the judges1 of Israel, whom I commanded to shepherd my people Israel, saying, “Why have you not built me a house of cedar?”’ 8Now, therefore, thus you shall say to my servant David, ‘Thus says the Lord of hosts, I took you from the pasture, from following the sheep, that you should be prince2 over my people Israel. 9And I have been with you wherever you went and have cut off all your enemies from before you. And I will make for you a great name, like the name of the great ones of the earth. 10And I will appoint a place for my people Israel and will plant them, so that they may dwell in their own place and be disturbed no more. And violent men shall afflict them no more, as formerly, 11from the time that I appointed judges over my people Israel. And I will give you rest from all your enemies. Moreover, the Lord declares to you that the Lord will make you a house. 12When your days are fulfilled and you lie down with your fathers, I will raise up your offspring after you, who shall come from your body, and I will establish his kingdom. 13He shall build a house for my name, and I will establish the throne of his kingdom forever. 14I will be to him a father, and he shall be to me a son. When he commits iniquity, I will discipline him with the rod of men, with the stripes of the sons of men, 15but my steadfast love will not depart from him, as I took it from Saul, whom I put away from before you. 16And your house and your kingdom shall be made sure forever before me.3 Your throne shall be established forever.’” 17In accordance with all these words, and in accordance with all this vision, Nathan spoke to David.