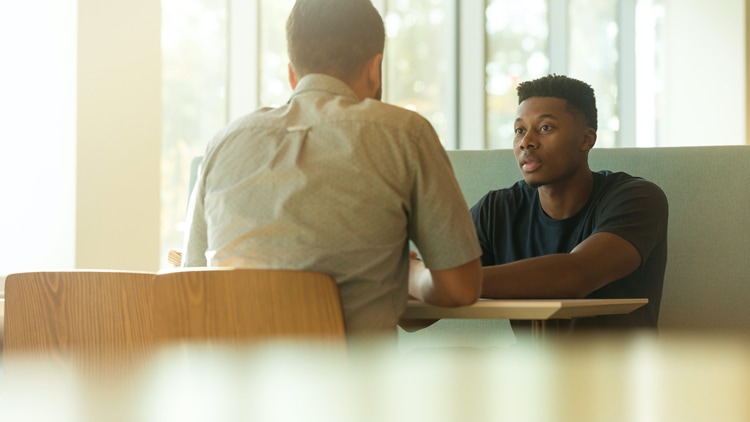 When [Paul] had come to Jerusalem, he attempted to join the disciples. And they were all afraid of him, for they did not believe that he was a disciple. But Barnabas took him and brought him to the apostles and declared to them how on the road he had seen the Lord.
Acts 9:26-27

One evening in the 1960s, an unkempt hippie arrived at a very large and proper church near the coast in San Francisco. When he walked in, none of the ushers greeted him. The church was packed, and as he looked along the rows, nobody moved—and so he continued to walk. Eventually, having walked all the way to the front without finding a seat, he sat down right in the middle of the aisle, cross-legged on the floor. At just that point, the senior deacon—a small man in a three-piece suit, with a pin in his tie—started to walk forward from the back. He walked right up to the young man—and he sat down on the floor beside him!

That deacon was a “Barnabas.” One Barnabas out of a group of 500 made all the difference in the life of a brand-new convert.

As a new convert to Christianity himself, Paul had no place to go. The believers in Jerusalem were fearful and doubted whether he’d experienced a radical life change. Paul needed somebody at this juncture in his life to encourage him, to lead him, and to introduce him to the church. For this task, God chose an ordinary man whom He had been forming all along. This man was a foreigner from Cyprus with a great religious background who had been given a new name by those who knew him: Barnabas, which means “son of encouragement” (Acts 4:36). It was this characteristic of Barnabas—his encouraging nature—which made him influential in Paul’s life. Scripture doesn’t tell us that Barnabas directed Paul anywhere, drew him a map, or suggested someone he might talk to. No, it simply gives us four wonderful words: “But Barnabas took him.” When you take somebody where they need to go, it involves time, effort, and a rearrangement of plans. Where many wouldn’t bother, Barnabas stepped up.

Barnabas would become Paul’s companion on his first great missionary journey (Acts 13:1-3). Not just the start of Paul’s Christian life but the start of his witness to the Gentiles owed much to this largely unsung hero. Only in heaven will it become apparent just how much of Paul’s ministry successes were a result of the way God initially and continually placed Barnabas by his side.

We need people with the spirit of Barnabas in our churches—people who exude this kind of compassion, who will give time and effort and rearrange their plans in order to reach out to and welcome in those who are new or who are struggling. Indeed, in many congregations, they’re already there; the church is sustained every single week as a result of men and women who recognize that there are no inconsequential moments in their days. There are no chance encounters. There are no irrelevant people. There are no insignificant tasks. Every church needs such people, who are willing to do what is necessary to “take” someone as Barnabas took Paul. Will that be you?

They Had Everything in Common

32Now the full number of those who believed were of one heart and soul, and no one said that any of the things that belonged to him was his own, but they had everything in common. 33And with great power the apostles were giving their testimony to the resurrection of the Lord Jesus, and great grace was upon them all. 34There was not a needy person among them, for as many as were owners of lands or houses sold them and brought the proceeds of what was sold 35and laid it at the apostles' feet, and it was distributed to each as any had need. 36Thus Joseph, who was also called by the apostles Barnabas (which means son of encouragement), a Levite, a native of Cyprus, 37sold a field that belonged to him and brought the money and laid it at the apostles' feet.