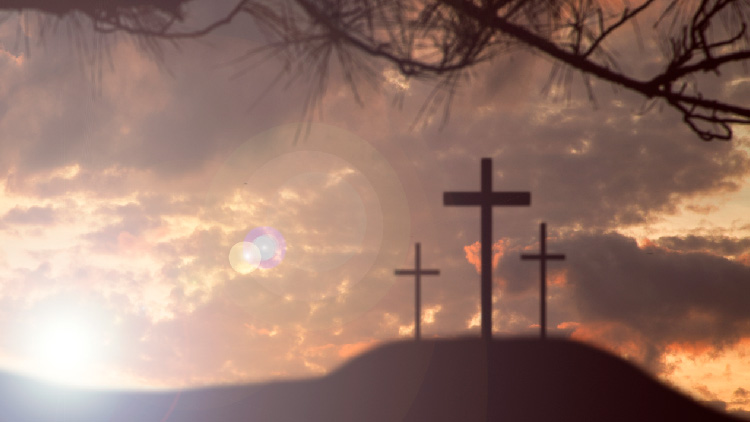 It was the will of the Lord to crush him; he has put him to grief … Out of the anguish of his soul he shall see and be satisfied; by his knowledge shall the righteous one, my servant, make many to be accounted righteous, and he shall bear their iniquities.
Isaiah 53:10-11

One of the most powerful aspects of the Gospel accounts of the crucifixion of Christ is the way that again and again and again they record how the events of the day fulfilled Old Testament prophecies made hundreds of years before.

When the chief priests and scribes delivered Jesus to Pilate, the Roman governor was perplexed at His choice not to publicly defend Himself. When Pilate asked, “Are you the King of the Jews?” Jesus replied enigmatically, “You have said so” (Matthew 27:11). When the religious leaders continued making accusations, Pilate asked again, “Have you no answer to make? See how many charges they bring against you” (Mark 15:4-5). Yet Christ did exactly as Isaiah 53:7 had foretold: He “opened not his mouth,” but instead waited in silence to be sentenced to death.

Later that day, only hours before Jesus breathed His last, the noonday sun was suddenly and dramatically swallowed up in darkness (Matthew 27:45). The Jewish people who were present ought to have understood the significance of that event from what had happened at the first Passover. They knew that in Egypt, the ninth plague, which preceded the death of the firstborn, was the plague of darkness (Exodus 10:21-29). The darkness on the day of crucifixion mirrored that very plague, identifying the need for blood to be shed, for a lamb to be slain, and for provision of shelter from the judgment of which the darkness itself spoke.

The Gospels show us that Jesus knew He was the one who had been promised, the one who would bear our sin to win our salvation. He lived out the prophetic words of Isaiah 53, and He operated of His own will according to the plan of Almighty God, expressing God’s love and sacrificing everything for those who deserve nothing except judgment.

As Old Testament prophecy was fulfilled before their eyes on the day that Christ was crucified, the biggest question that Pilate and the Jews each faced was essentially “What shall I do with Jesus?” And that is the great question that we all face every day. By our very nature, we neglect His wisdom, rebel against His authority, and doubt His goodness. That is why “it was the will of the LORD to crush him,” for God had purposed that He Himself would “bear [our] iniquities.” The realization that God had planned His Son’s sin-bearing death centuries before He hung on the cross—in fact, had planned it before the creation of the world—ought to bring us to our knees in awe, not just at the sovereignty of God’s plan but also at the love that brought it into being, the love that wrought its climax at Calvary. Christ remained silent as He stood before Pilate; there is no reason or excuse for us to remain silent as we kneel before Him and consider all He has done for us.

16And he came to Nazareth, where he had been brought up. And as was his custom, he went to the synagogue on the Sabbath day, and he stood up to read. 17And the scroll of the prophet Isaiah was given to him. He unrolled the scroll and found the place where it was written,

18“The Spirit of the Lord is upon me,

because he has anointed me

to proclaim good news to the poor.

He has sent me to proclaim liberty to the captives

and recovering of sight to the blind,

to set at liberty those who are oppressed,

19to proclaim the year of the Lord's favor.”

20And he rolled up the scroll and gave it back to the attendant and sat down. And the eyes of all in the synagogue were fixed on him. 21And he began to say to them, “Today this Scripture has been fulfilled in your hearing.”