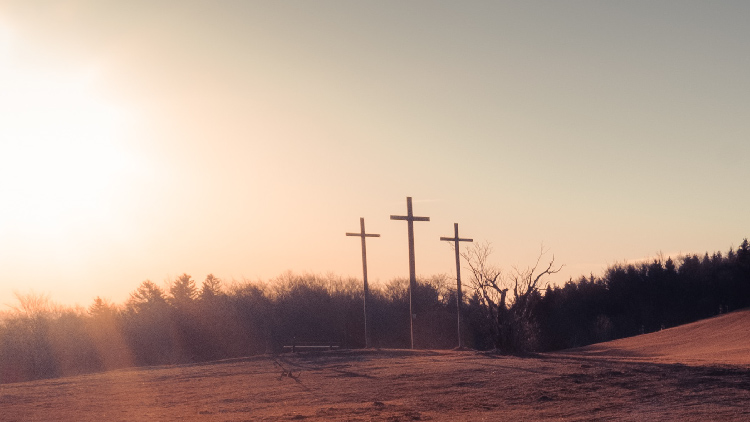 God’s Plan All Along

By a single offering he has perfected for all time those who are being sanctified.
Hebrews 10:14

It’s hard to fathom Christ’s final, agonizing hours upon a Roman cross. The floggings, torture, and humiliation He endured were reserved for the worst of criminals. It is no wonder, then, that with His last breath, Jesus cried out in a loud voice, Tetelestai!—“It is finished” (John 19:30).

But what was this cry? Was Jesus simply announcing His own death? Was it an acknowledgment that the cruelty and pain were now finished? Was it even something of a cry of defeat?

On this point, the Bible is clear: Jesus’ final word was actually a shout of victory, of triumphant recognition (Colossians 2:15; Hebrews 10:12-14; 1 Peter 3:18). He had fully accomplished the work He had come to earth to do. In the realm of eternity, in perfect fellowship and harmony with one another, the Father had planned, and the Son along with the Spirit had willingly agreed, that this would be the way—and now their purpose was being accomplished.

So we must always remember that Christ’s sacrificial death was according to the Father’s plan. Christ was chosen to bear the penalty of mankind’s sins “before the foundation of the world” (1 Peter 1:20). Likewise, Isaiah prophesied concerning the Suffering Servant who was to come, saying, “It was the will of the LORD to crush him” (Isaiah 53:10). From all of eternity, the Father chose the Son to be the one who would provide an atoning sacrifice for the sins of many.

The Father’s plan is paralleled by the Son’s sacrifice. When Jesus walked onto the stage of human history, He was clear concerning His role and mission: “I have come down from heaven, not to do my own will but the will of him who sent me” (John 6:38). The sacrifice of the Lord Jesus was not coerced. Rather, He laid down His life in full awareness of and voluntary submission to the Father’s plan.

The truth and reality of this covenant plan of redemption is applied to our lives by the Spirit’s testimony. The Spirit of God testifies through God’s word, reminding us of the wonder of what God has accomplished for us through Christ’s finished work on the cross (Hebrews 10:15). Christ’s offering means you stand perfected in God’s sight. Your sin has been removed by His Son, and you are clothed in the righteousness of His Son.

The death and resurrection of the Lord Jesus Christ was never Plan B. Nothing could be further from the truth! In eternity past, the triune God determined that the road to Calvary would be the way of salvation. Bow today under the beauty and wisdom of God’s redemption plan, asking the Holy Spirit to help you understand more fully and appreciate more deeply what it meant for the Son of God to bear and take away your sin.

He Was Pierced for Our Transgressions

13Behold, my servant shall act wisely;2

he shall be high and lifted up,

and shall be exalted.

14As many were astonished at you—

his appearance was so marred, beyond human semblance,

and his form beyond that of the children of mankind—

15so shall he sprinkle3 many nations;

kings shall shut their mouths because of him;

for that which has not been told them they see,

and that which they have not heard they understand.

1Who has believed what he has heard from us?1

And to whom has the arm of the Lord been revealed?

2For he grew up before him like a young plant,

he had no form or majesty that we should look at him,

and no beauty that we should desire him.

3He was despised and rejected2 by men;

a man of sorrows,3 and acquainted with4 grief;5

and as one from whom men hide their faces6

he was despised, and we esteemed him not.

4Surely he has borne our griefs

and carried our sorrows;

yet we esteemed him stricken,

smitten by God, and afflicted.

5But he was pierced for our transgressions;

he was crushed for our iniquities;

upon him was the chastisement that brought us peace,

and with his wounds we are healed.

we have turned—every one—to his own way;

and the Lord has laid on him

the iniquity of us all.

7He was oppressed, and he was afflicted,

yet he opened not his mouth;

like a lamb that is led to the slaughter,

and like a sheep that before its shearers is silent,

so he opened not his mouth.

8By oppression and judgment he was taken away;

and as for his generation, who considered

that he was cut off out of the land of the living,

stricken for the transgression of my people?

9And they made his grave with the wicked

and with a rich man in his death,

although he had done no violence,

and there was no deceit in his mouth.

10Yet it was the will of the Lord to crush him;

he has put him to grief;7

when his soul makes8 an offering for guilt,

he shall see his offspring; he shall prolong his days;

the will of the Lord shall prosper in his hand.

11Out of the anguish of his soul he shall see9 and be satisfied;

by his knowledge shall the righteous one, my servant,

make many to be accounted righteous,

and he shall bear their iniquities.

12Therefore I will divide him a portion with the many,10

and he shall divide the spoil with the strong,11

because he poured out his soul to death

and was numbered with the transgressors;

yet he bore the sin of many,

and makes intercession for the transgressors.