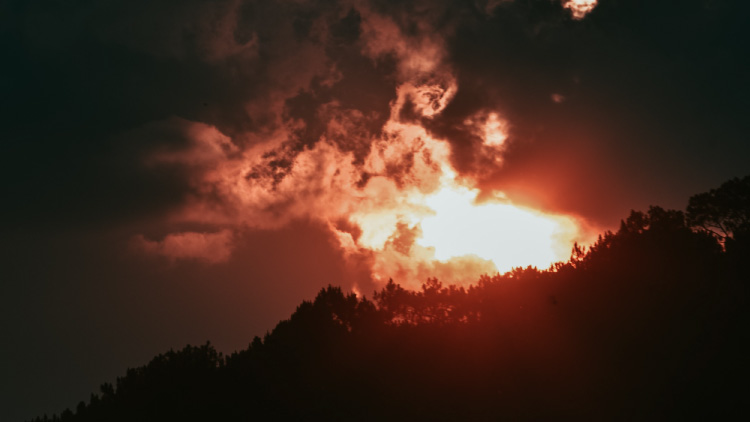 It was now about the sixth hour, and there was darkness over the whole land until the ninth hour, while the sun’s light failed. And the curtain of the temple was torn in two.
Luke 23:44-45

As Jesus’ ministry progressed, one of the great concerns of the Jewish religious establishment was that He had, it appeared, claimed that He would destroy the temple and raise it again in three days (John 2:19). Indeed, this was one of the main charges brought against Him (Mark 14:58). When Jesus was on the cross, then, passersby mocked and ridiculed Him, shouting, “You who would destroy the temple and rebuild it in three days, save yourself!” (Matthew 27:40). But there He remained, hanging on the cross, in the darkness.

And then, in the midst of the darkness and the upheaval of the crucifixion, all of a sudden something mysterious and utterly unexpected happened: God Himself desecrated the temple.

“The curtain of the temple was torn in two,” Luke tells us. This was the very curtain that hung in the temple to symbolically bar the way into God’s presence. It was the great sign that imperfect people could not be in the same space as the holy God. All through the Old Testament, anyone who had presumed to come into God’s presence without observing the ceremonial cleansing rituals and making the necessary sacrifices had died (for instance, Numbers 3:2-4). But now, suddenly, as Jesus was on the very verge of death, this symbol of restrictive exclusivity was destroyed. By destroying it, God declared that the old priestly ritual for entrance into His presence had been abolished and the barrier of sin dividing humanity from their Maker had been obliterated. There is no longer any need to keep our distance from God. Instead, “we have confidence to enter the holy places by the blood of Jesus, by the new and living way that he opened for us through the curtain” (Hebrews 10:19-20).

Our access to God isn’t restricted to a temple or a church or any other building, nor must it be through a merely human priest or a guru. No, 2,000 years ago God broke into history to establish direct access to Himself through Jesus. Now there is “one mediator between God and men, the man Christ Jesus, who gave himself as a ransom for all” (1 Timothy 2:5-6). The temple curtain being torn in two was divine vandalism on your behalf! You don’t have to be sidetracked by priests and rituals anymore. They can be nothing but pointless. Instead, you can come to God, just as you are, confident of welcome and mercy and help, all because of Jesus.

The Full Assurance of Faith

19Therefore, brothers,3 since we have confidence to enter the holy places by the blood of Jesus, 20by the new and living way that he opened for us through the curtain, that is, through his flesh, 21and since we have a great priest over the house of God, 22let us draw near with a true heart in full assurance of faith, with our hearts sprinkled clean from an evil conscience and our bodies washed with pure water. 23Let us hold fast the confession of our hope without wavering, for he who promised is faithful. 24And let us consider how to stir up one another to love and good works, 25not neglecting to meet together, as is the habit of some, but encouraging one another, and all the more as you see the Day drawing near.