Videos cannot be added to the listen queue at this time.
This item is no longer available.
Hard Pressed But Not Crushed, Part One

Hard Pressed But Not Crushed, Part One

As God’s people carried out the work described in Nehemiah 3, each person had a unique part to play. At the same time, each individual was dependent on everyone else as they worked together to fulfill God’s purposes. Alistair Begg reminds us that we are not saved into isolation, but into a community. The urgent work of spreading the Gospel in our day requires a unified commitment by God’s people.

13Hanun and the inhabitants of Zanoah repaired the Valley Gate. They rebuilt it and set its doors, its bolts, and its bars, and repaired a thousand cubits5 of the wall, as far as the Dung Gate.

14Malchijah the son of Rechab, ruler of the district of Beth-haccherem, repaired the Dung Gate. He rebuilt it and set its doors, its bolts, and its bars.

28Above the Horse Gate the priests repaired, each one opposite his own house. 29After them Zadok the son of Immer repaired opposite his own house. After him Shemaiah the son of Shecaniah, the keeper of the East Gate, repaired. 30After him Hananiah the son of Shelemiah and Hanun the sixth son of Zalaph repaired another section. After him Meshullam the son of Berechiah repaired opposite his chamber. 31After him Malchijah, one of the goldsmiths, repaired as far as the house of the temple servants and of the merchants, opposite the Muster Gate,7 and to the upper chamber of the corner. 32And between the upper chamber of the corner and the Sheep Gate the goldsmiths and the merchants repaired.

Opposition to the Work

1 Now when Sanballat heard that we were building the wall, he was angry and greatly enraged, and he jeered at the Jews. 2And he said in the presence of his brothers and of the army of Samaria, “What are these feeble Jews doing? Will they restore it for themselves?1 Will they sacrifice? Will they finish up in a day? Will they revive the stones out of the heaps of rubbish, and burned ones at that?” 3Tobiah the Ammonite was beside him, and he said, “Yes, what they are building—if a fox goes up on it he will break down their stone wall!” 4Hear, O our God, for we are despised. Turn back their taunt on their own heads and give them up to be plundered in a land where they are captives. 5Do not cover their guilt, and let not their sin be blotted out from your sight, for they have provoked you to anger in the presence of the builders.

6So we built the wall. And all the wall was joined together to half its height, for the people had a mind to work.

7 But when Sanballat and Tobiah and the Arabs and the Ammonites and the Ashdodites heard that the repairing of the walls of Jerusalem was going forward and that the breaches were beginning to be closed, they were very angry. 8And they all plotted together to come and fight against Jerusalem and to cause confusion in it. 9And we prayed to our God and set a guard as a protection against them day and night.

10In Judah it was said,2 “The strength of those who bear the burdens is failing. There is too much rubble. By ourselves we will not be able to rebuild the wall.” 11And our enemies said, “They will not know or see till we come among them and kill them and stop the work.” 12At that time the Jews who lived near them came from all directions and said to us ten times, “You must return to us.”3 13So in the lowest parts of the space behind the wall, in open places, I stationed the people by their clans, with their swords, their spears, and their bows. 14And I looked and arose and said to the nobles and to the officials and to the rest of the people, “Do not be afraid of them. Remember the Lord, who is great and awesome, and fight for your brothers, your sons, your daughters, your wives, and your homes.”

15When our enemies heard that it was known to us and that God had frustrated their plan, we all returned to the wall, each to his work. 16From that day on, half of my servants worked on construction, and half held the spears, shields, bows, and coats of mail. And the leaders stood behind the whole house of Judah, 17who were building on the wall. Those who carried burdens were loaded in such a way that each labored on the work with one hand and held his weapon with the other. 18And each of the builders had his sword strapped at his side while he built. The man who sounded the trumpet was beside me. 19And I said to the nobles and to the officials and to the rest of the people, “The work is great and widely spread, and we are separated on the wall, far from one another. 20In the place where you hear the sound of the trumpet, rally to us there. Our God will fight for us.”

21So we labored at the work, and half of them held the spears from the break of dawn until the stars came out. 22I also said to the people at that time, “Let every man and his servant pass the night within Jerusalem, that they may be a guard for us by night and may labor by day.” 23So neither I nor my brothers nor my servants nor the men of the guard who followed me, none of us took off our clothes; each kept his weapon at his right hand.4 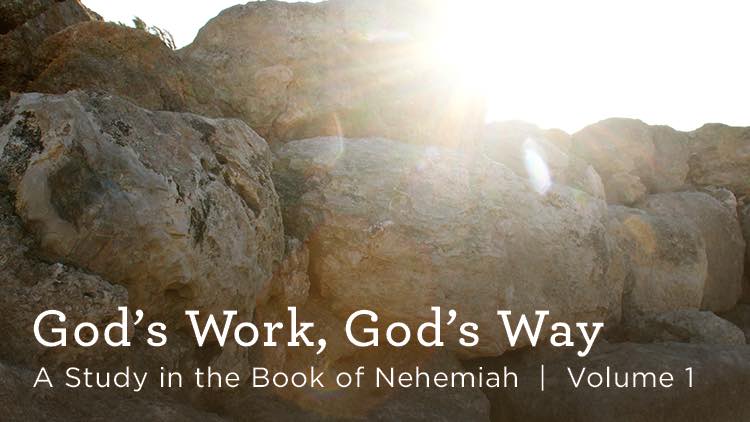 The people of Israel returned from exile and joyously rebuilt the temple, but joy gave way to discouragement as the city of Jerusalem lay in ruins. Enter Nehemiah: a gifted leader moved to action by compassion for his people and concern for the glory of God. But the Book of Nehemiah isn’t a tutorial on leadership. It’s the record of God’s faithfulness to His people as He equipped them to do His work for His glory.

In Volume One of this series, Alistair Begg explains that God accomplishes His purposes through His people as they depend on the resources He provides. We see the significance of prayer in the life of the Church, the vitality of God’s Word as it realigns our hearts, and the necessity of taking practical steps to achieve what God has called us to do. God’s people must remain unified and committed to the task that God has given, secure in the conviction that God’s work done in God’s way will display God’s glory. 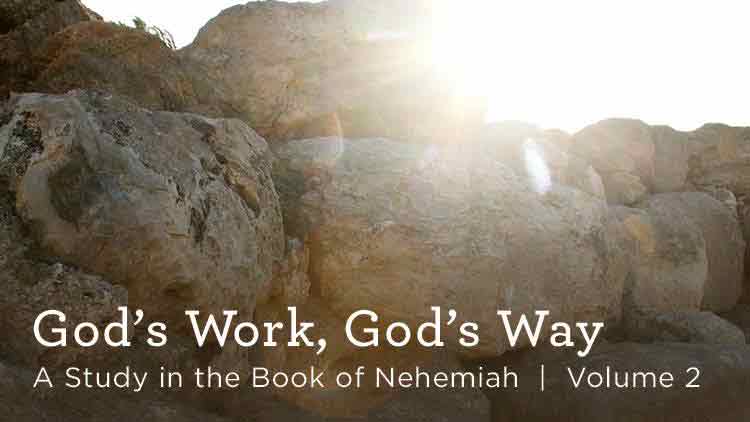 The people of Israel returned from exile and joyously rebuilt the temple, but joy gave way to discouragement as the city of Jerusalem lay in ruins. Enter Nehemiah: a gifted leader moved to action by compassion for his people and concern for the glory of God. But the Book of Nehemiah isn’t a tutorial on leadership. It’s the record of God’s faithfulness to His people as He equipped them to do His work for His glory.

In Volume Two of this series, Alistair Begg reminds us that God calls His people to obey His Word and that failure to do so has real implications. God’s people in Nehemiah’s day heard His Word proclaimed, and their hearts were stirred to worship and obedience. When ordinary people with ordinary lives resolve to obey God, He will accomplish extraordinary things as God’s work is done in God’s way.