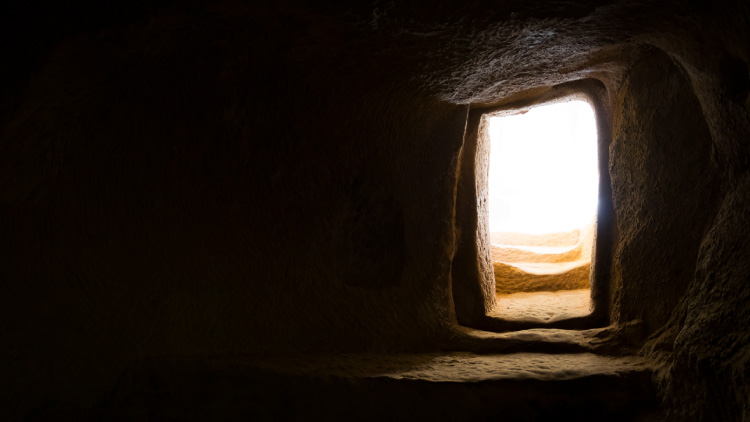 Out of the Shadows

There was a man named Joseph, from the Jewish town of Arimathea. He was a member of the council, a good and righteous man, who had not consented to their decision and action; and he was looking for the kingdom of God. This man went to Pilate and asked for the body of Jesus.
Luke 23:50-52

Jesus’ burial was by no means a foregone conclusion, for two main reasons. First, the crucifixion of criminals was often not the end of their humiliation; they were often barred from the honor of a proper burial. Second, the release of a corpse depended solely on a relative or friend requesting permission to bury the body—and who was left to bury Jesus? The disciples had fled, the crowd had dispersed, and the women were unprepared to make such a request.

It is into this moment of history that an individual emerges suddenly and silently—an individual who “was a disciple of Jesus, but secretly for fear of the Jews” (John 19:38).

Fear had silenced Joseph of Arimathea up to this point. Jesus’ life and teaching had attracted him and brought him to saving faith, but his faith remained clandestine. He went about his spiritual business in a secretive way—that is, until the cross brought him out into the open. And so, after too long hanging back in the shadows, Joseph “went to Pilate and asked for the body of Jesus.”

The Gospel narrative describes Joseph’s careful handling of Jesus’ body as he “took it down” from the cross, “wrapped it in a linen shroud and laid him in a tomb cut in stone, where no one had ever yet been laid” (Luke 23:53). We read likewise of Nicodemus, “who earlier had come to Jesus by night … bringing a mixture of myrrh and aloes” to assist Joseph in the burial process (John 19:39).

Joseph’s brief and singular appearance is also a clear reminder to us of God’s providence at work at all times and in all places. God prepared Joseph for this very moment. Joseph was fearful and secretive, but God used him for good, just as He does us. Joseph had presumably missed many opportunities to stand up for his King; he had presumably kept quiet so many times when he should have spoken out. Yet it was this man whom God ensured would be present on this day for this important task. And Joseph rose to it, risking everything—his status, his reputation, his safety—to honor Jesus by ensuring that He had a proper burial.

You may find yourself identifying with Joseph: you have been living as a secret disciple, believing but afraid to let anyone in your neighborhood or workplace know about your faith. If so, then today, ask the Lord Jesus Christ to forgive your fearfulness and enable you, like Joseph, in the light of the cross, to take your stand boldly for Him in the love of Christ. You may have missed moments in the past when you had the chance to stand for your King; but God is always ready to give you the task of honoring His Son, and you need not pass up the next opportunity.

Peter and John Before the Council

1And as they were speaking to the people, the priests and the captain of the temple and the Sadducees came upon them, 2greatly annoyed because they were teaching the people and proclaiming in Jesus the resurrection from the dead. 3And they arrested them and put them in custody until the next day, for it was already evening. 4But many of those who had heard the word believed, and the number of the men came to about five thousand.

5On the next day their rulers and elders and scribes gathered together in Jerusalem, 6with Annas the high priest and Caiaphas and John and Alexander, and all who were of the high-priestly family. 7And when they had set them in the midst, they inquired, “By what power or by what name did you do this?” 8Then Peter, filled with the Holy Spirit, said to them, “Rulers of the people and elders, 9if we are being examined today concerning a good deed done to a crippled man, by what means this man has been healed, 10let it be known to all of you and to all the people of Israel that by the name of Jesus Christ of Nazareth, whom you crucified, whom God raised from the dead—by him this man is standing before you well. 11This Jesus1 is the stone that was rejected by you, the builders, which has become the cornerstone.2 12And there is salvation in no one else, for there is no other name under heaven given among men3 by which we must be saved.”

13Now when they saw the boldness of Peter and John, and perceived that they were uneducated, common men, they were astonished. And they recognized that they had been with Jesus. 14But seeing the man who was healed standing beside them, they had nothing to say in opposition. 15But when they had commanded them to leave the council, they conferred with one another, 16saying, “What shall we do with these men? For that a notable sign has been performed through them is evident to all the inhabitants of Jerusalem, and we cannot deny it. 17But in order that it may spread no further among the people, let us warn them to speak no more to anyone in this name.” 18So they called them and charged them not to speak or teach at all in the name of Jesus. 19But Peter and John answered them, “Whether it is right in the sight of God to listen to you rather than to God, you must judge, 20for we cannot but speak of what we have seen and heard.” 21And when they had further threatened them, they let them go, finding no way to punish them, because of the people, for all were praising God for what had happened. 22For the man on whom this sign of healing was performed was more than forty years old.

Footnotes
1 4:11 Greek This one
2 4:11 Greek the head of the corner
3 4:12 The Greek word anthropoi refers here to both men and women
Topics: Courage Jesus Christ Providence of God