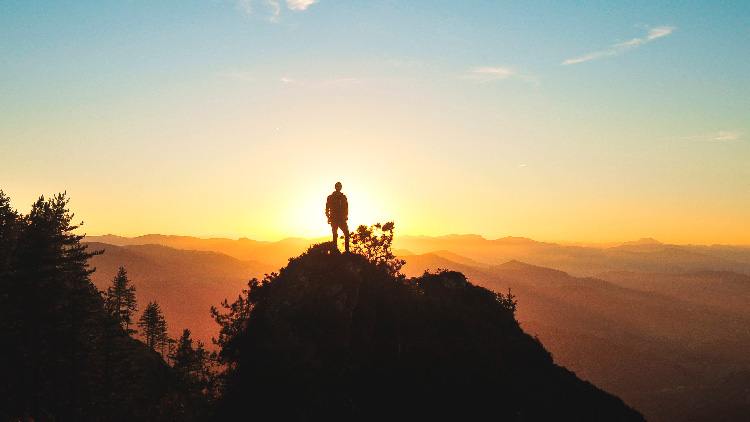 Mordecai also gave him a copy of the written decree issued in Susa for their destruction, that he might show it to Esther and explain it to her and command her to go to the king to beg his favor and plead with him on behalf of her people.
Esther 4:8

“Her people.” The secret was out. Esther was the woman who won the beauty pageant, became queen to the most powerful king in the known world, and kept her true identity concealed for years. Yet if no one had known before, Hathach the eunuch now knew that the queen was a Jew. She and her family were included in the edict of extermination. Esther’s identity had been flushed out, not as a result of God intervening with a burning bush, a miraculous sign, or a dramatic voice from heaven but by a message from her cousin.

The queen was confronted with a situation that called for her to leave the shadowlands behind and reveal who she was, what she believed, and to whom she belonged. In her private world she knew she was a Jew, part of the covenant family of God, but she had been living in a public world where that fact remained undisclosed. Privately she had one identity, but publicly she had another—and now circumstances had brought her to the moment when she would have to determine who she would be. Was her identity primarily in being a queen of Persia or in being a woman of God?

Some of us are confronted by that very same predicament: we’ve got a private little world, we believe the gospel in our hearts, and we’re in church on a Sunday, but there’s no one in our office, on our streets, or anywhere around us who knows. And then the moment comes when private and public cannot be kept apart: a note from a friend, a call from your mom, a conversation with your business colleague, or a seemingly random interaction brings you to a moment when you must choose which side of the fence you will live on. The ancient words of Joshua challenge you: “Choose this day whom you will serve” (Joshua 24:15). For ultimately, a private faith that never reveals itself publicly is not a true and living faith at all. If our allegiance to King Jesus is real, it must be public.

So perhaps this verse and this page bring you to your moment of challenge. Perhaps today you find yourself in the shadowlands between two worlds, and you know that you are being challenged to declare boldly, in the place where you have been keeping it private, “This is who I am, this is where I belong, and this is what I believe.” Will you do that? God is worthy of nothing less than your full, open devotion.

The Apostles Arrested and Freed

17But the high priest rose up, and all who were with him (that is, the party of the Sadducees), and filled with jealousy 18they arrested the apostles and put them in the public prison. 19But during the night an angel of the Lord opened the prison doors and brought them out, and said, 20“Go and stand in the temple and speak to the people all the words of this Life.” 21And when they heard this, they entered the temple at daybreak and began to teach.

Now when the high priest came, and those who were with him, they called together the council, all the senate of the people of Israel, and sent to the prison to have them brought. 22But when the officers came, they did not find them in the prison, so they returned and reported, 23“We found the prison securely locked and the guards standing at the doors, but when we opened them we found no one inside.” 24Now when the captain of the temple and the chief priests heard these words, they were greatly perplexed about them, wondering what this would come to. 25And someone came and told them, “Look! The men whom you put in prison are standing in the temple and teaching the people.” 26Then the captain with the officers went and brought them, but not by force, for they were afraid of being stoned by the people.

27And when they had brought them, they set them before the council. And the high priest questioned them, 28saying, “We strictly charged you not to teach in this name, yet here you have filled Jerusalem with your teaching, and you intend to bring this man's blood upon us.” 29But Peter and the apostles answered, “We must obey God rather than men. 30The God of our fathers raised Jesus, whom you killed by hanging him on a tree. 31God exalted him at his right hand as Leader and Savior, to give repentance to Israel and forgiveness of sins. 32And we are witnesses to these things, and so is the Holy Spirit, whom God has given to those who obey him.”

33When they heard this, they were enraged and wanted to kill them. 34But a Pharisee in the council named Gamaliel, a teacher of the law held in honor by all the people, stood up and gave orders to put the men outside for a little while. 35And he said to them, “Men of Israel, take care what you are about to do with these men. 36For before these days Theudas rose up, claiming to be somebody, and a number of men, about four hundred, joined him. He was killed, and all who followed him were dispersed and came to nothing. 37After him Judas the Galilean rose up in the days of the census and drew away some of the people after him. He too perished, and all who followed him were scattered. 38So in the present case I tell you, keep away from these men and let them alone, for if this plan or this undertaking is of man, it will fail; 39but if it is of God, you will not be able to overthrow them. You might even be found opposing God!” So they took his advice, 40and when they had called in the apostles, they beat them and charged them not to speak in the name of Jesus, and let them go. 41Then they left the presence of the council, rejoicing that they were counted worthy to suffer dishonor for the name. 42And every day, in the temple and from house to house, they did not cease teaching and preaching that the Christ is Jesus.